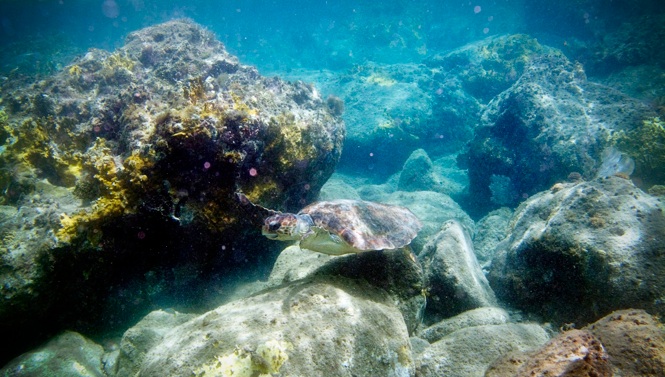 A leatherback turtle from St.Kitts found earlier this month off the coast of Massachusetts in the North Atlantic Ocean. The turtle, named Kitty, was originally tagged in St. Kitts by the The St. Kitts Sea Turtle Monitoring Network (SKSTMN). Exciting news for Dr. Kimberly Stewart and her team at SKSTMN. Kitty's movements can be tracked online.

SKNVibes reported on the story:

"Following a health assessment and transmitter placement, the female was given the name Kitty and was released. Kitty was only the third leatherback sea turtle to be flipper tagged in St. Kitts during the SKSTMN’s first year of leatherback night patrols in 2005. She was originally tagged on 26 April 2005 while nesting on Keys Beach and then returned to nest on Keys Beach three times in 2007, once on North Friars in 2009, and twice on Keys Beach in 2011. The SKSTMN expects to see Kitty again on the nesting beaches in St. Kitts in 2013 if she follows her established schedule.

The transmitter placed on her will provide important data over the course of the next few months and will enable scientists and the public to track her movements online. Kitty’s movements can now be tracked online by visiting SEATURTLE.ORG

It is not unusual for female leatherback sea turtles to migrate over 10,000 miles between their nesting and foraging grounds. This highly migratory nature makes them a shared resource both regionally and internationally and drives home the importance of sharing critical biological information gathered on both the nesting beaches and foraging grounds. Fortunately for Kitty, St Kitts has already taken steps to protect her nesting ground through the designation of the UNESCO St. Mary’s Biosphere Reserve that includes Keys Beach, the main leatherback nesting beach on the island."